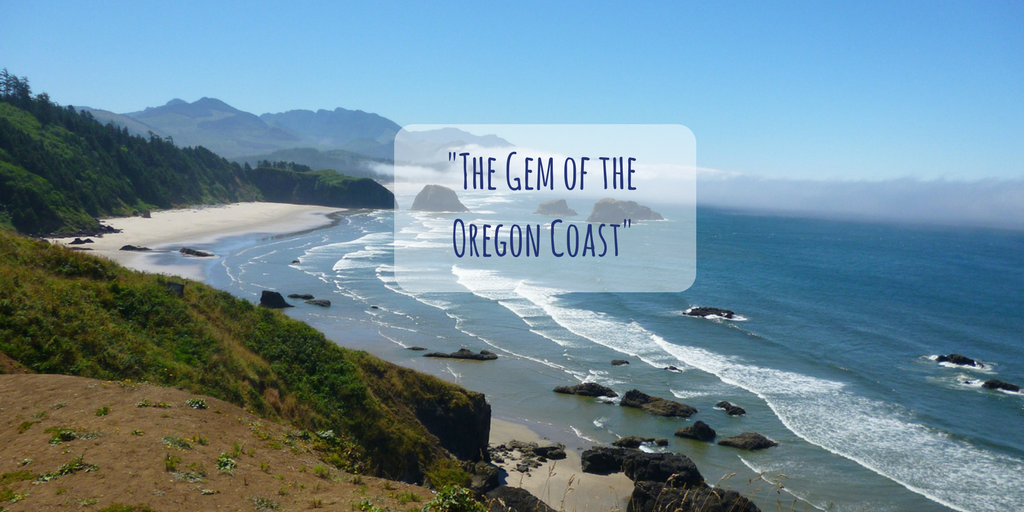 Yachats, the Gem of the Oregon Coast

Never heard of Yachats? Me, either. Not until my husband and I happened upon the tiny Central Oregon coastal town while traveling the Pacific Northwest on our honeymoon. And it was love at first sight.

Yachats (pronounced YAH-HOTS) has to be one of the best travel destination secrets ever. The tiny town, rightly nicknamed “The Gem of the Oregon Coast,” straddles the Yachats River and rests at the foot of the Pacific Coast Mountain Range where lush green forest and rugged coastline meet the sea. The town’s name, derived from a Chinook Indian word, literally means “dark waters at the foot of the mountain.”

“One of the best travel destination secrets ever!”

In this small town, a free-spirited hippie vibe permeates the air. The people are original, friendly and profoundly proud and protective of the natural wonders and environment that surround them.

We were fascinated the moment we stepped from our car and heard faint strains of otherworldly music coming from the direction of the beach. Intrigued, we set out to find the source and came upon a lone bagpiper walking up from a sandy, 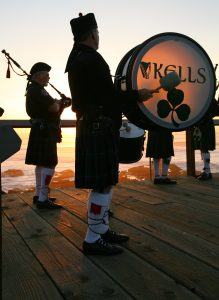 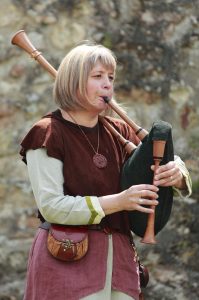 windswept stretch of shoreline. When she finished playing, we chatted with her, and learning we were newlyweds, she insisted on playing a traditional honeymoon blessing for us. A hauntingly lyrical song…and a wonderful welcome!

We discovered Yachats during its annual Celtic Music Festival, held there for the past 16 years. During the rest of our stay in this charming town we heard a lot of toe-tapping Celtic music. From a tiny concert in the Little Log Church, built in 1930 and is now a museum, to a bagpipe and bodhran (a shallow handheld Irish drum) surf walk, and then the big finale jamboree in the Yachats Commons.

Musical celebrations and other types of events seem to be continual in Yachats, from the monthly Big Band Concert and Dance, to “Rainspout” the annual Music Festival, to wine tasting and food events. Visit from early spring to late autumn and you’ll be sure to happen upon one of them.

Later, that first day, we drove to “the most spectacular viewpoint” high atop the headland at the Stone Shelter Lookout at Cape Perpetua. The shelter was built in 1933 as part of the Roosevelt Civilian Conservation campaign and is the highest point (745 feet) on the Oregon coast. 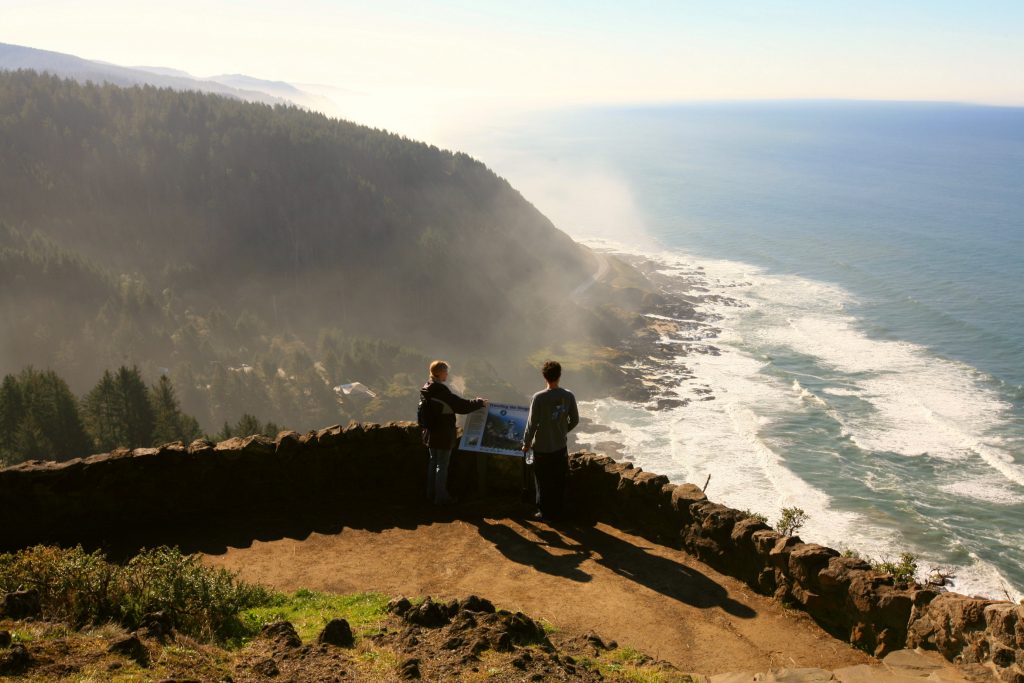 The breathtaking view from the top begged for photographs, and we took dozens, some while hanging over the craggy cliffs to capture the vast ocean vista. 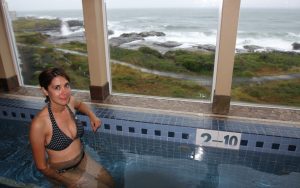 The highlight of the evening was the Spa at the Overleaf Lodge where we relaxed in the steam rooms and luxuriated in the seaside pool and Jacuzzi.

The next day, we drove the scenic 13 miles south from Yachats to the Heceta Head Lighthouse, 206 feet above the Pacific and said to be the most photographed lighthouse in the United States. Believe it. This is one serious lighthouse. We hiked from the light keeper’s house to the beach and then to the lighthouse. A volunteer happily took us up to see the 392-prism Fresnel lens that is still working today and casts its beams some 21 miles out to sea. In fact, it’s the brightest light on the Oregon coast and emits one flash every ten seconds. 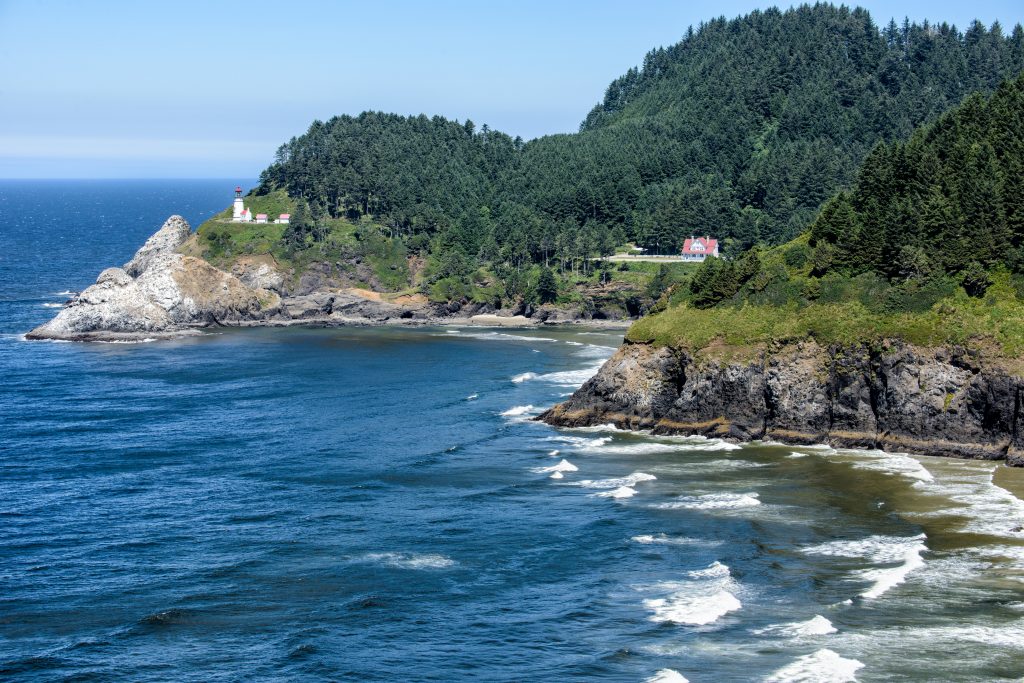 If we had known earlier, we could have stayed at the year-round Light Keeper’s House, TripAdvisor ‘s top rated Bed & Breakfast in Yachats, and taken advantage of the discounted room rates offered during off-peak times. Circa 1894, both the Keeper’s House and the lighthouse are listed on the National Register of Historic Places.

Going to Yachats in the Pacific Northwest during the off-season (we went in November) you’ll find plenty of discounts and great package deals, and you’re more likely to hang out with locals, which is the most fun and the only way to go in my book.

On that first trip we realized, with so much to see and do in the area, one trip would not be enough, and we’ve gone back again and again. We’re fortunate to live close to an airport that houses the no-frills Allegiant Air, so we can grab a super cheap, quick flight to Eugene, Oregon, then travel only a short distance to Yachats. We’ve made several inexpensive weekend getaways to Yachats in the years since our honeymoon.

On a recent trip we rented a cute AirB&B two-bedroom house on the beach, with a cozy fireplace, for a budget-friendly $110 a night. On that same trip, we drove a short distance to Newport where my niece and I explored the Oregon Coast Aquarium, and my husband and his brother explored the tasting room at the Rogue Beer Headquarters.

But you don’t have to drive elsewhere to find a good craft beer. Yachats Brewing has a wide selection of niche beers with names like Kraut Hammer, Apricot Assassin and Black-Footed Ferret. They also have ciders…and kombucha, AKA mushroom tea, one of the hottest trends in health beverages. The brewery continues the Yachats vibe offering local, sustainable, health-conscious food that’s delicious and nothing like usual bar food.

If caffeine is what gets you started each morning, you’re in luck. To fuel our daily adventures, we’d grab a cup of coffee, or in my case a skinny latte, at the Green Salmon Coffee House. Tea drinkers will likely find a favorite here, too. Everything about this free-trade, solar and wind powered, water-saving, organic coffee house says Yachats unique.

Our favorite place to eat in Yachats is the historic Drift Inn Restaurant, situated right off Highway 101 with a view of the bay where the river flows into the Pacific. We like to snag a cozy booth by the window under one of the brightly colored umbrellas covering the ceiling, have dinner and then stay for the live music offered every night of the week.

The food at the Drift Inn is made from scratch and locally sustained, and all the dishes we’ve tried, from crab ravioli to burgers, are phenomenal. Be sure to sample one of the decadent desserts. Your taste buds will thank you. My mouth waters just thinking about the marionberry cobbler. 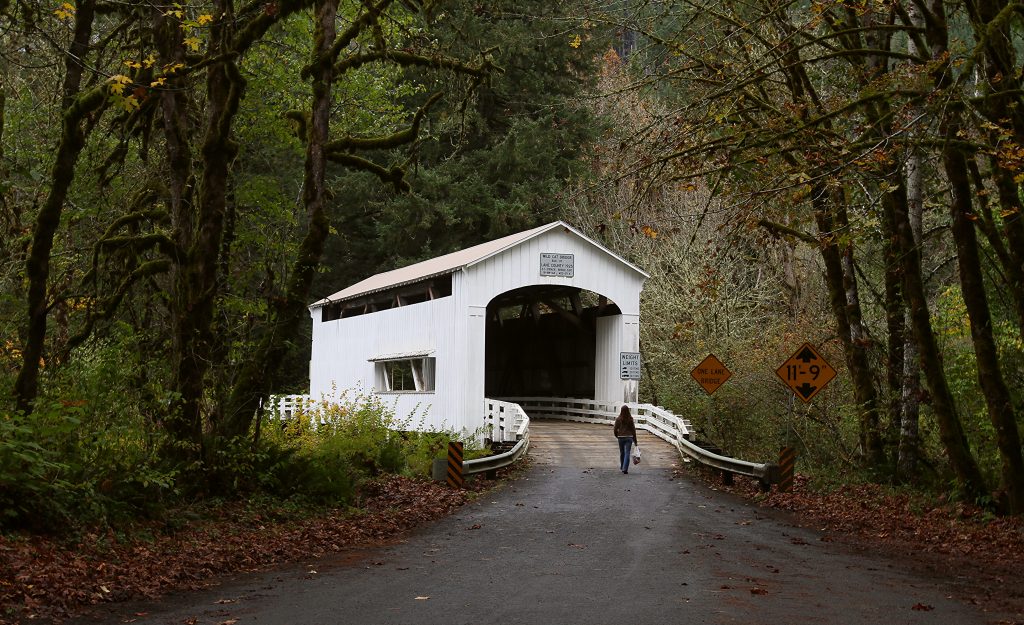 On other trips we’ve explored some of the many covered bridges, unique art galleries, and fascinating tide pools teeming with sea life. The 27 miles of hiking trails, some wheelchair accessible, are a hiker’s dream. 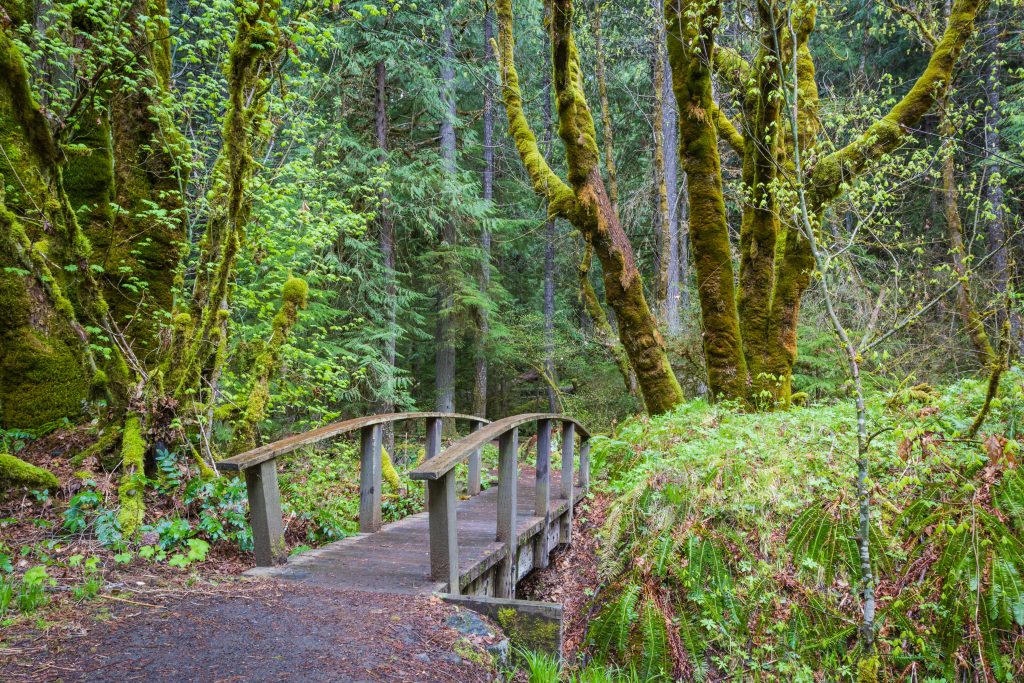 We’ve hiked the trail to the Giant Spruce Tree, and then later sat on our patio and watched a storm roll in from the sea’s horizon. 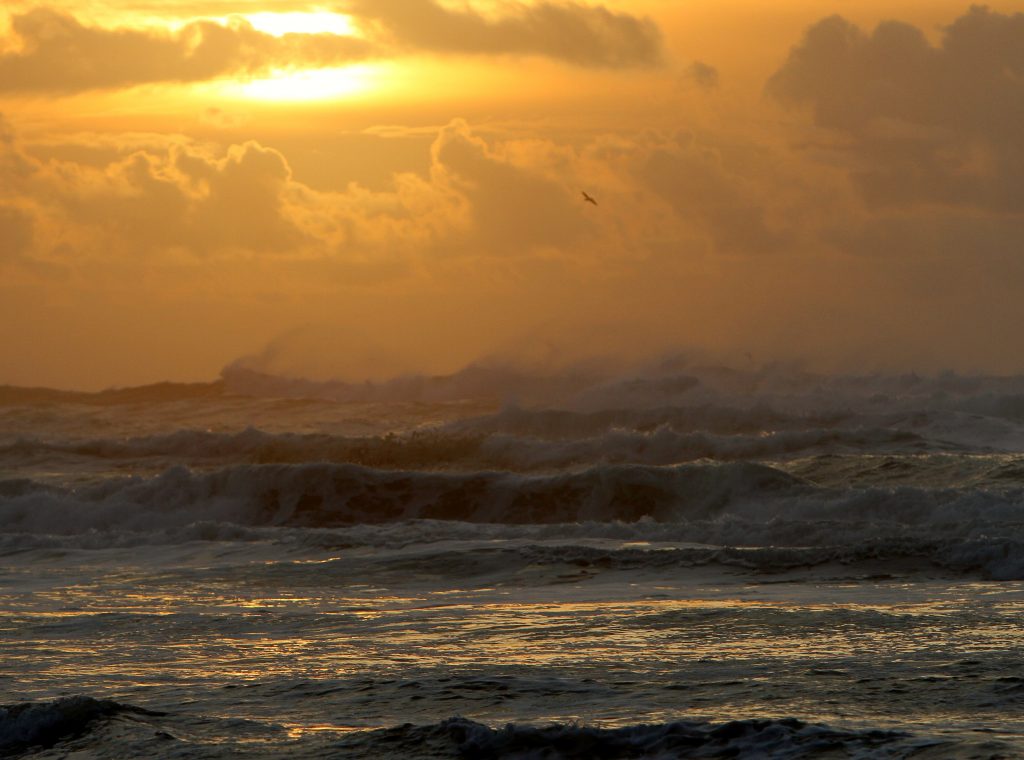 There’s no question why Yachats is called the “Gem of the Oregon Coast” and if you asked me, I’d say it’s the Gem of the Pacific Northwest.

Yachats is the very essence of Oregon. If you’re looking for a place that exudes romance and relaxation, offers a variety of outdoor activity, and scenery so gorgeous it hurts the eyes, you’ll find it in and around Yachats in abundance. It’s no wonder this glorious part of the Oregon Coast is our favorite…and has inspired us to renew our wedding vows while there the next time.